This article was originally posted on the Oregon Arts Watch blog on September 15, 2014.

Film Preview: I Live For Art

“One of the primary revelations that came as we worked on this film was that creativity takes courage.”

Anything that exists must be first imagined, suggests Stanford University professor and composer Mark Applebaum, who along with colleagues musicians-composers Brian McWhorter from the University of Oregon and Juilliard and Manhattan School faculty member Mark Gould, share their “prolific and innovative” creativity with viewers in a new documentary, I Live For Art: A Journey Into Meaning and the Creative Process,  by co-directors/producers Ri Stewart and Renne Slade of Bluedot Productions from Yachats, Oregon. The film showed Wednesday, September 17 in Eugene and it will screen on Thursday, September 25 in Portland. 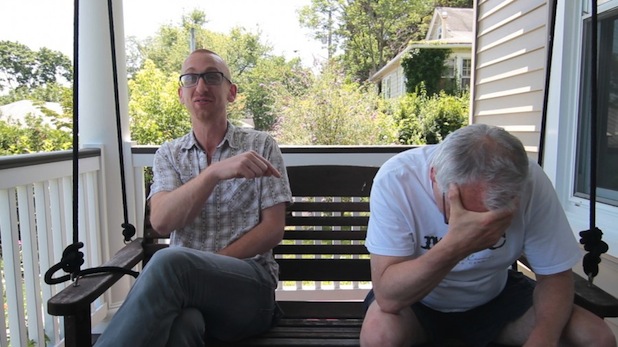 Brian McWhorter says, “Maybe it’s not really the creative insight we’re looking for, but the dark night of the soul,” with Mark Gould. Photo: Bluedot Productions.

It is the creative risk takers, Applebaum and McWhorter note, who are willing to let go of and challenge their own limitations. And that allows them to enter a state of flow in which problems are clarified and solutions imagined — sometime easily, often not. Although they seemingly disagree on specific sources from which inspiration might arise, they both agree with University of Oregon physics professor Goswami’s observation that this ability to imagine, or image solutions, is one of the wonderful attributes that makes humans, human.

Conceiving and directing a film on the subject of creativity is a complex, challenging, and engaging task. We asked co-directors/producers Ri Stewart and Renne Slade to share with readers what they had discovered about creativity in producing this film. They wrote in an e-mail reply:

One of the primary revelations that came as we worked on this film was that creativity takes courage. In many, many ways we have come to feel that it is the creative among us who truly are the most courageous. This quality is often overlooked and even dismissed with the typically capitalist dismissal that “creativity is related to play” which, while perhaps useful in encountering new connections and ideas, belies the effort required to come upon and encounter an idea that is both fresh as well as meaningful. But it’s more than innovation. It takes courage to break through what is already known to us. Our individual ego identity is made up of what we know. The existential angst and uncertainty that we encounter keeps most from taking this risk — which is itself the only means of bringing forward something of actual meaning to the lives of us all.

We believe that society would benefit greatly from recognizing the vital importance of  “thinking a thought we have never before thought” which is most often brought to us through the creations of our artists who give voice to that which is still in its most nascent form. It has to be cultivated. It’s not easy. Yet, it’s the duty of the creative!

Creativity is dangerous. To break the mold means there’s nothing obvious there to support the idea – be it fan bases, critics, distributors, etc. Most people feel more secure and comfy banking on what is already known. Just look at all the sequels in the theaters today.

We have to be solving something to have a creative solution. It doesn’t appear as a flash of insight without the friction of trying to find a new answer. How do we find a great answer? We pose a great question.

We also asked what they had learned about their own creative process in making the film.

In our own creative process, we benefited enormously from time spent “not” working on the project directly and instead cultivating the unconscious processing that occurs whenever we are not struggling directly with the question at hand. Our film scared our distributors, yet they were intrigued. To win OIFF (Oregon Independent Film Festival 2014, Best Biographical Documentary) and PhilaFilm (Philadelphia International Film Festival 2014 , Silver Award) — as well as being featured with NW Film’s Tracking Series — shows there’s a place for the new that can’t easily be seen and pigeonholed.

ArtsWatch asked Brian McWhorter for his response to the film now that the Eugene-based trumpeter has gone through the filmmaking process (as a subject) and then viewed the documentary with others. He says the most surprising response came when he heard from an audience member that she was concerned for him.

I brushed it off, but then several audience members chimed in with a similar takeaway. I realized afterwards, that this film happened to catch me at a particularly trying time in my life — and I think one thing that I realized is that engaging in the creative process is intrinsically vulnerable and revealing. It’s one thing to go through it, create a work, and then shove the remnants of the process under the rug. It’s another thing to create a work, and then have the remnants in a documentary for the world to see.  Quite humbling.

I’m inclined to believe that the creative process, in general, is messy for everybody — but I think it is more important for me to get to understand my own process as an artist. The reason is simple: the more I understand my own mess, the more comfort I have — when I’m in the midst of the worst parts — that this too shall pass.” 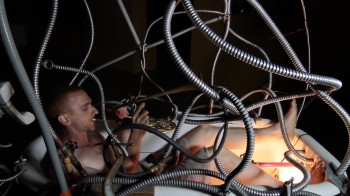 I Live for Art features a “cast” of composers and musicians around whom short stories about creativity are woven together. An example is McWhorter setting out to construct an environmental space in which to practice his trumpet. What emerges is a sculptural-like cocoon made from an old bathtub and a complex of tubing and wire. This project seemingly provides him, throughout the film, with numerous design problems and creative challenges shared with viewers. An image of McWhorter reclining in his finished tub is humorously reminiscent of Jacques-Louis David’s famous painting, The Death of Marat.

The film, promoted as exploring the “humorous, satirical and unique philosophical exploration of the creative process – its angst, its thrills, its purpose and its methods,” is applicable to all those engaged in the creative process: musicians, visual artists, filmmakers, dancers, designers, architects, or members of any profession in which problems are identified and solutions created. For some creatives it is taking an extra step, or risk, beyond conventional expression to originate work that is refreshingly new and sets them apart as the next Jackson Pollock, Philip Glass, or Frank Lloyd Wright. This process of breaking through personal boundaries and expected practices, resulting in new music, new art, new architecture, and new ideas that excite and inform audiences and enriches culture is the essence of I Live For Art.

I found I Live for Art to be an engaging film that is indeed a ”journey into meaning and the creative process” that anyone interested in creativity will enjoy. The film had its Oregon premiere at Eugene’s Bijou Metro Theater at 9:30 pm on Wednesday, September 17 and it will show in Portland at 7 pm Thursday, September 25 at the Portland Art Museum’s Whitsell Auditorium. ArtsWatch’s Brett Campbell will moderate a short pre-screening panel discussion involving some of those involved in the film. You can read his preview of the film here.

Gary Ferrington is a Senior Instructor Emeritus, Instructional Systems Technology, College of Education, University of Oregon. He co-founded the OpenLens Festival and served as coordinator of DIVA Media Arts Program, both in Eugene. Ferrington is an advocate for new music and coordinates Oregon ArtsWatch’s Oregon ComposersWatch.

ArtsWatch is a non-profit arts and culture journalism project that explores the arts and their intersection with the wider culture in Oregon and the Northwest. Learn more about ArtsWatch at http://www.orartswatch.org.